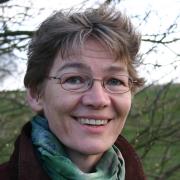 I work part time with research in fruit at The Department of Plant and Environment, section of Crop Science in Taastrup. From 2022-2025 I mainly work in the project InnOBreed, an international project concerning development of fruit cultivars for organic production.

Since 2019 I worked in the project: Developing unique Danish apple-cultivars. In the years 2014-2018 I worked mainly in the GUDP-project ProtecFruit and in 2012-2013 in the GUDP-project FruitGrowth. Then I tested a new method to prevent apple scab by using irrigation at strategic moments.

In the years 2010-2011 I participated in a project of genetic ressources on maintaining an utilisation of old plum- damsons- and sourcherry-cultivars for production of organic cider and fruitwine of high quality.

In the period 2007-2010 my main task was the development of the web-based identifications-key "The Pometum Apple-key" with descriptions of 319 cultivars at the Pometum.

In 2006 my main task was to characterise the collection of 111 plum cultivars at the Pometum. Furthermore I participated in testing the cooking-potentials of 30 apple-cultivars.