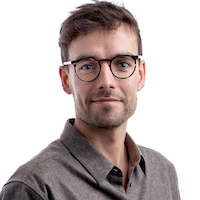 His research, which combines ethnographic methods and political theory, is concerned with the intersection of critical democratic theory and the politics of climate change.