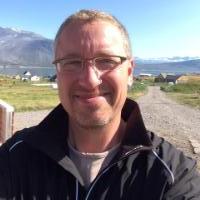 2008    PhD Coordinator, DGG and now at Geology Section and Geography Section of DGN

Paternity leave: 10 weeks during summer and autumn of 2008.

Development of a joint inversion method for simultaneous estimation of seismic velocity and density structure and application of this method for interpretation of by data from the Central Graben area of the North Sea.

Waveform modeling of super long-range “peaceful nuclear explosion” (PNE) seismic data for estimation of upper mantle and crustal heterogeneity with implications for modeling of the crust-mantle transition, the lithosphere, and the top of the mantle transition zone.

Waveform modeling of reflection seismic data for improved understanding of how interference from sub-resolution layering influences seismic observations and may give rise to caveats in geological interpretation of seismic data.

Development of tomographic inversion methods for proper account for correlated data errors. Inversion approach has been applied in least-squares-based interpretation of cross-hole radar data and tailored to work also in stochastic modeling of the same type of data.

Tailoring of stochastic modeling algorithms for interpretation of cross-hole radar data in relation to description of sediment heterogeneity.

LN 73 of LN’s publications are listed in Web of Science, where LN’s h-index is 21.

LN was Honorary Visiting Fellow at Department of Geology, University of Leicester from 21 October 1994 to 10 December 1994.

Invited lecture on fault detection at conference held in the Royal Society, London in 1999.

Guest lecture at Rice University in 2000.

LN was granted a prestigious ‘Steno’ stipend from the Danish Council for Independent Research in 2001.

Invited lecture at Univ. Texas at Austin in 2003.

Paper by Nielsen and Thybo was selected as a highlighted paper of Geophysical Research Letters in 2004.

Invited speaker at the American Geophysical Union’s Fall Meeting in 2006.

In 2010, LN was elected chairman of the Geological Society of Denmark (term ends in 2014).

Participation in other research projects and centres

LN has been evaluator of 7 PhD thesis.

LN has been convener of shallow seismics and georadar sessions of the European Geosciences Union (EGU) since 2004. LN was co-convener of a near-surface geophysical session of the 33rd International Geological Congress.

LN is currently the main supervisor for 6 PhD students.

Teaching at University of Copenhagen