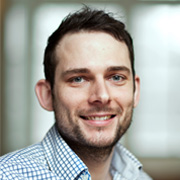 Jens Petersen received a B.Sc. in 2005 and a M.Sc. in 2010 both in Computer Science at the University of Copenhagen in Denmark. 2010 to 2014 was spent as a Ph.D. student in Medical Image Analysis, also at the University of Copenhagen, with a four month stay as a visiting researcher at the Centre for Medical Image Computing at University College London, England. Since getting his Ph.D. in May of 2014, Jens has been employed as a postdoc in the Image Group.