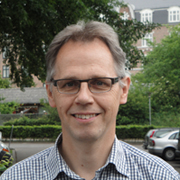 My research primarily concerns molecular and cellular studies of how powdery mildew fungal pathogens are established in the plant cell and how plants defend themselves against their attack. One branch of the research concerns effector proteins that are secreted from these fungi. The effectors are being studied in conjunction with the extrahaustorial membrane that the laboratory also is uncovering the nature of. A second branch is based on my finding of the PEN1 syntaxin to be important for pre-invasive immunity in Arabidopsis against the powdery mildew fungi. This involves unravelling of how PEN1 and associated membrane trafficking components confer immunity, and exploitation of the lesion-mimic phenotype of pen1 syp122 to unravel pathogen defence signalling.

It is costly for plants to adapt to the environment. Therefore, I’m promoting the idea that plant resources in certain situations can be diverted away from such adaptation processes, and instead be used to increase yield. According the REWIDE (REsistance WIthout DEfence) concept, the aim is to do this for disease resistance. Based on knowledge from Arabidopsis, we aim to describe the pathogen defence processes in cereals. This will make it possible to perform gene-specific mutations to generate plants “without defence” and re-orient the resources towards yield. Meanwhile, alternative defence-independent “resistance” is being invented and introduced into these plants.