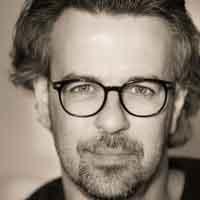 Dimitrios Stamou is a Professor in the Department of Chemistry and the Nanoscience Center at the University of Copenhagen. He received his primary education in Greece, and his Bachelor’s in Physics from Leeds University in England. During his PhD and postdoc at the Swiss Federal Polytechnique School in Lausanne, he worked on surface-patterning of self-assembled monolayers, bilayers and vesicles under the guidance of Claus Duschl and Horst Vogel. He established his own group at the University of Copenhagen in 2004 with a focus on the biophysics of membranes and membrane proteins.

Dimitrios has developed disruptive technologies that made significant contributions in two major fields:

Single molecule biology. In a breakthrough paper in Science (2016) he developed a method that resolved ionic currents with sensitivity 106-fold higher than the Nobel prize awarded method of patch clamp. These transformative studies enabled him to observe for the first time the function of single transporter molecules, and revealed that transporter function and regulation is controlled by long-lived on/off states (similarly to ion channels). In collaboration with the Groves lab, he reached a related conclusion, using a novel assay able to observe for the first time at the single molecule level the activation of the oncogene small GTPase Ras (Science 2014).

Membrane biophysics. To understand the origins and biological function of Membrane Polymorphism (the distinct shapes assumed by cells and cellular organelles), Dimitrios developed a series of methods investigate quantitatively membrane curvature/shape. One of the most important insights emerging from this work was identifying and characterizing two novel classes of membrane curvature sensors which are of ubiquitous biological and pharmacological importance: lipidated proteins (Nat. Chem. Biol. 2009, 2015a, 2015b) and G-protein coupled receptors (Nat. Chem. Biol. 2017).

Dimitrios also pioneered the development of methods to investigate individual proteoliposomes revealing that ensemble populations of proteoliposomes can be dramatically heterogeneous. He demonstrated that such heterogeneities can severely skew ensemble-average measurements of biophysical and biochemical proteoliposome properties, but also enable a new generation of high-throughput ultraminiaturised assays with 109-fold lower sample consumption (Nat. Nanotech. 2012; Nat. Meth. 2014).