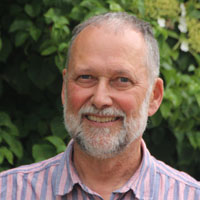 David B. Collinge was born in Liverpool in 1958 and brought up in nearby Southport in the north-west of England. He was educated in genetics at the Universities of Liverpool (BSc (hons) 1979) and Newcastle Upon Tyne (PhD, 1982). The subject of his PhD thesis was "The Genetic Control of Cyanogenic Glucoside Biosynthesis" in White Clover (Trifolium repens) and his supervisor Professor M.A. Hughes. He came to the University of Århus in Denmark for 1983 as an EU-funded postdoctoral fellow to work and gain training in molecular biology in the laboratory of Professor Kjeld A. Marcker. A second postdoctoral position at the University of Newcastle Upon Tyne (1983-1985) concerned cloning the gene encoding linamarase from clover. David B. Collinge was a Higher Scientific Officer at the (then) John Innes Institute in Norwich (1985-87), where he studied the defence response mechanisms in Turnip (Brassica campestris) against the bacterial pathogen Xanthomonas campestris. He moved to the then Dept. of Plant Physiology at the then KVL in 1987 as a visiting postdoctoral fellow in Professor Birger Lindberg Møller's laboratory to help introduce plant molecular biology techniques to the department. David B. Collinge was appointed Associate Professor in Molecular Plant Pathology in 1988 and Professor of Plant Pathology in 2002.

David's main research interest through his career has concerened the mechanisms of defences against pathogens in plants and his research group has worked with several biological systems, mainly involving fungal pathogens since 1988, for example, Pea (Pisum sativum) with Ascochyta pisi where both plant defence mechanisms and fungal pathogenicity mechanisms were studied; Rape (Brassica napus) with Leptosphaera maculans; Wheat (Triticum aestivum) with Septoria tritici and Fusarium graminearum; Maize (Zea majs) with Maize Rayado Fino Virus and Norway Spruce (Picea abies) with Ceratobasidium bicorne. The bulk of the research effort has concerned Barley (Hordeum vulgare) with the Powdery Mildew Fungus, Blumeria graminis and more recently Fusarium graminearum, and this effort has been rewarded with much new knowledge on the nature and role of different defence mechanisms plants. Recent efforts concern understanding the roles of NAC transcription factors and receptor-like protein kinases.

The major new area concerns endophytic fungal interactions, which stand to uncover defining principles in crop protection and plant tolerances across a wide range of biotic and abiotic stresses. Our research further looks to investigate how fungi and plants interact and manipulate each other resulting in different lifestyles ranging from biotrophic, hemibiotrophic and necrotrophic pathogenic interactions through commensal endophytic and rhizospheric interactions.

This research effort has been published in over 100 refereed international publications to date giving an H-index of 42. He is also active in the public debate drawing attention to the importance of plant diseases and plant biotechnology in developing sustainable food security.

David B. Collinge is Professor of Plant Pathology.  He is head of section for Microbial Ecology and Biotechnology. He sits in the faculty and departmental PhD study boards (ph.d.-udvalg). He is a member of the editorial board of the international scientific journals "European Journal of Plant Pathology", "Plant Pathology" and the plant-microbe section of Frontiers of Microbiology/Plant Science. He serves regularly for Scientific Boards for various research councils. He sits in the "chemical engineering", “agritculture” and "biological sciences" national university examiners boards and on the managerial board for "Kølpin Ravn og Ernst Grams legate" and the Danish national advisory council for Plants and Plant Health (Udvalget for planter og plantesundhed). He has been a member of the presidium of BSPP (https://www.bspp.org.uk/) from 2018-22, serving as President in 2022.