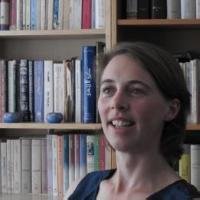 My research revolves around worldviews and departures in an interest in how worldviews come into existence as new constellations of already existing ideas, ideals and images – as a kaleidoscope where the same pieces of coloured glass take different forms and materialize into different realities as they are moved around. My focus is on how these worldviews are being constructed, practised and enacted. Thus, I investigate worldviews as thought practises that are products of their historical, cultural and political contexts and that gain relevance in lived lives. In my work, I use media as a window to explore constructions and practices of worldviews while I not only explore the media product and media institution but also include the humans ‘behind and in front of the screen’, the media producers and users.

In my current position as postdoc in the research project Archiving the Future: Re-Collections of Syria in War and Peace (2020-2023).

Archiving the Future makes the representation of Syria in war and peace the object of an ethnographic inquiry of image construction. It examines how images and memories reconfigure what Syria was and is and what it is in a process of becoming for Syrians themselves by focusing on the active establishment of archives and the processes of archiving. The project is a critical contribution to rethinking unstable temporal orderings of past, present, and future as it engages the question of how to theorize futurity. Hence, the research questions are: How do archives come into being, and how do they shape, regulate, and change perceptions, memories, and potential futures? How is the image of Syria reassembled, re-made, and re-mediated by Syrian actors across personal, collective, and institutional contexts? And how do political changes in the present impact on the reading and use of the past in the creation of viable futures?

Within this overall project frame, I investigating how media institutions (as opposed to personal and collective media actors) contribute to image construction, processes of archiving, and the reimagining of Syria.