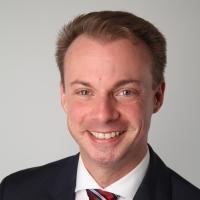 Boris Düdder is an associate professor at the department of computer science (DIKU) at the University of Copenhagen (UCPH), Denmark. His primary research interests are artificial intelligence and formal methods in software engineering, where he is studying automated program generation for adaptive systems with high-reliability guarantees. He is working on the computational foundations of reliable and secure Big Data ecosystems. His research is bridging the formal foundations of computer science and complex industrial applications.

He is a guest lecturer at the Copenhagen Business School (CBS), Denmark, and the University of Electronic Science and Technology of China (UESTC), Chengdu, P.R. China. He is involved in multiple projects on innovative and dependable industrial IT infrastructure for enterprises, manufacturing industries, and national healthcare IT, e.g., Data Ecosystems, Smart Factories, and Industry 4.0. He received several research grants on international, European, and national levels on scalable infrastructures for data ecosystems, healthcare IT, blockchain, and FinTech, where he enjoys operating in multinational interdisciplinary consortia. He is a research fellow at the Institute for Intelligent Production Systems, Qingdao, P.R. China. He was awarded numerous prizes for his contributions to academia and industry.

He is a member of the European Blockchain Center (EBCC), co-organizer of the Blockchain Summer Schools in Copenhagen in 2017-2020, and UCPH representative at the European Cyber Security Organisation (ECSO), Brussels, Belgium. His community services include serving as a program committee member in various academic conferences and workshops. He is an invited speaker on various international academic and industrial conferences, symposia, and workshops.

He received his Ph.D. (Dr. rer. nat.) at the Technical University of Dortmund, Germany, where he worked nine years as a research chair manager and senior researcher. He was a senior researcher at the Fraunhofer Institute for Software- and Systems Engineering (ISST) and Fraunhofer Institute for Material Flow and Logistics (IML), Dortmund, Germany. He was faculty at Tsinghua University, Beijing, P.R. China.

He has more than 15 years of industry experience and founded multiple companies in the field of industrial geographical information systems, supply chain IT, and predictive analytics on Big Data. He serves on the business advisory boards of Aryze IVS and NTA IVS, Denmark. He worked as an international consultant and software engineer for European banks, logistic providers, and manufacturing companies, e.g., a consultant for the Microsoft Corp., Redmond.