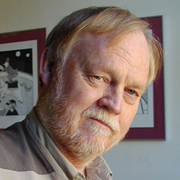 Main focus: The geology of the North Atlantic igneous province.

Participated in the research on the lava plateau at the Blosseville Coast in East Greenland, on the ash layers in northern Jutland and on volcanic rocks in Iceland.

Has focussed in later years on geological photogrammetry and has used Twin-Otter fixed Wing aircrafts and helicopters as photo platforms to cover several thousand kilometres of mountain walls as stereo panels with calibrated cameras.

Has published a number of geological map-sheets and special geological section maps from the Nuussuaq Basin. This work was awarded ?The Geology Prize of Denmark? in 2005.

Discovered in 1992 oil seeps in the basalts on Nuussuaq and has since then participated in the search for oil in Greenland, headed by the Stratigraphical Department of GEUS.

Projects: The geological mapping of the Paatuut and the Sikillingi areas on Nuussuaq. A general investigation of the volcanic rocks on Disko and Nuussuaq in cooperation with senior researcher L.M. Larsen, GEUS; associated professor G.K. Pedersen, Institute for Geography and Geology, Copenhagen University and dr. Keld S. Dueholm and many others.

Work on monographics on the two main volcanic units of the Nuussuaq Basin: The Vaigat and the Maligât Formation is in progress in close cooperation with senior researcher L.M. Larsen, GEUS.