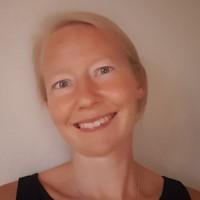 Currently, I am affiliated with ProGram (Information PROminence and GRAMmar in mind and brain), an interdisciplinary research centre uniting researchers from the faculties of Humanities, Health, Medical Sciences and Social Sciences (University of Copenhagen). ProGram investigates how the human brain processes language and how linguistic processing relates to general cognitive processing. My role is to examine the emergence of grammar from an ontogenetic perspective. Through spontaneous-speech studies and psycholinguistic experiments, I investigate whether the distinction between lexical elements (potentially discursively primary) and grammatical elements (inherently discursively secondary) can account for developments in children’s early language acquisition.

In December 2016, I defended my PhD dissertation, Linguistic perspective marking and mental-state reasoning in children with autism: A training study with complement clauses (2013-1016). Here, I investigated the influence of language on social cognition in young schoolchildren with autism by means of a training study. I worked together with psychologists from The Autism Research Group, City University London and am part of the research group Language and Cognition – Perspectives from Impairment, University of Copenhagen.

The project had its roots in my work on typically developing children’s acquisition of linguistic viewpoint markers. Since 2008, I have investigated children’s acquisition of complement-clause constructions and dialogic particles through experiments and observational studies, and to this end I have recorded a large spontaneous-speech corpus of group conversations between kindergarteners who are followed longitudinally (at present 222 hrs, age range: 1;1-6;7 years).

In addition to this, my research on children’s language acquisition concentrates on three areas:
By means of comprehension experiments (3-to-6-year-olds, adults) and spontaneous-speech analyses, I examine syntactic strategies for comprehending and producing transitive clauses across development. I focus specifically on the object-first construction and on the interplay between children’s mastery of grammatical cues (case and word order) and sensitivity to discourse-contextual cues (topicality and contrast).
Secondly, I am part of the research group From Sound To Word (Center for Child Language, University of Southern Denmark). We examine the relationship between phonological and lexical development in the transition from babbling to first words and in children’s early lexicon (9-30 months), and our primary goal is to assess the effects of sound structure and phonetic variation in the ambient language (Danish).
Thirdly, as part of the research group GIDDY (Gender in Dutch and Danish Youngsters), I conduct production experiments with bilingual schoolchildren (age 8-13 years), examining bilingual acquisition of grammatical gender. We compare effects of structural traits in children’s L1 (Arabic, Urdu, Turkish, Somali) and in the target language (Danish vs Dutch) and will also investigate the relationship between formal mastery and social use of the markers of grammatical gender.

A distinct area of research is my work on the severely endangered Otomanguean language Acazulco Otomí, spoken in the mountain village San Jerónimo Acazulco in Valle de Toluca, Mexico. In a collaborative project with Otomí speakers in the village and with archaeologists, anthropologists and linguists in Mexico and the US, I investigate relations between language, material culture and cultural routine practices, focusing on spatial language and representation of landscape. We also take part in the revitalization efforts budding in Acazulco, where Otomí has been almost displaced by Spanish and is only spoken by the grandparent generation.

In May 2016, Jan Heegård Petersen, Steffen Haurholm-Larsen and I organized the conference Geographic grounding: Place, direction and landscape in the grammars of the world. With 26 talks on 20 languages spoken on five different continents, the conference addressed crosslinguistic variation and similarities in coding strategies, dependencies across linguistic subsystems and place-marking systems as parts of ecological and cultural niches.

I have taught the following linguistic courses: