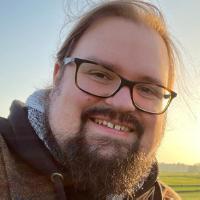 Troels holds a PhD in Assyriology from the University of Copenhagen. His dissertation, Medicine in Ancient Assur: A Microhistorical Study of the Neo-Assyrian Healer Kiṣir-Aššur, examined a single Neo-Assyrian (ca. 900-612 BCE) healer by the name of Kisir-Ashur, who lived in the ancient city of Assur around 650 BCE in modern day Northern Iraq. The work is the first detailed study of a single Mesopotamian healer’s education, career, and practice. As part of the project Hidden Treasures, Troels will be in charge of the digitalization of the Danish National Museum’s collection of cuneiform writing, as well as the publication of a group of remarkable unpublished texts in an seperate associated project entitled “Learned cuneiform tablets from the ancient Syrian city Hamath”. The city of Hama, known from the Bible as Hamath, was excavated by a Danish expedition from 1931-38, and today the objects from this excavation are located primarily at the Danish National Museum. Among the most interesting finds are 17 cuneiform tablets consisting of letters, medical prescriptions and magical rituals from around 1.000-720 BCE. These manuscripts are unique, since this period has only yielded few cuneiform tablets with comparable content from this region. The digitization is funded via the project Hidden Treasures by the Carlsberg Foundation and the Augustinus Foundation, and the Hama investigation is funded as Troels' research project by the Edubba Foundation.

Troels has recently generously been granted funding from the Carlsberg Foundation for a two year Visiting Fellowship at the University of Oxford with the project "Interdisciplinary research in nerve and muscle illnesses and their healing in cuneiform texts from ancient Mesopotamia".