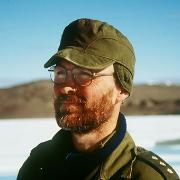 Working at the Zoological Museum, University of Copenhagen (ZMUC) from 1977 until 2000, primarily as an assistant (in some periods acting) curator of mollusks.

2001-spring 2003 working as project coordinator and database manager on the Greenland Marine Benthos project headed by Ole S. Tendal. Project concluded with a report to the Environment Agency, who financed the work.

From spring 2003 working at the ZMUC as curatorial assistant on various groups and as database manager for the Greenland Marine Benthos database.

Has through the years taken a number of university and external courses in Danish and Arctic marine fauna, in zoogeography, museology, relational databases and GIS.

Has participated in many collecting trips and expeditions to tropical areas (Philippines, Thailand), the North Atlantic (the BIOFAR and BIOICE programmes), the Antarctic (EPOS), and Greenland. Leader of the zoological part of the 1995 Independence Fiord Expedition.

Has participated in a number of congresses, symposia and meetings of malacologists or Danish and Nordic marine scientists, usually with talks and/or posters.