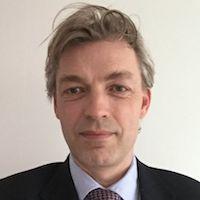 Martin Elsman conducts research in the design and implementation of programming languages. Areas of research include domain-specific languages for financial contracts and compilation techniques for functional languages, in particular with focus on data-parallel languages, module systems, Web technology, program analyses for memory management, and program optimisation. Martin is Professor in the Programming Languages and Theory of Computation section at Department of Computer Science, University of Copenhagen (DIKU), where he serves as head of studies for a BSc education on Computer Science and Economics. Martin is also an active maintainer of several software tools, including the MLKit, a full-blown Standard ML compiler, which targets both JavaScript and x86-64 machine code. Before joining DIKU in 2012, Martin spent four years in SimCorp developing software, using functional programming techniques, for specifying and managing financial contracts. Before his time at SimCorp, Martin was Associate Professor at the IT University of Copenhagen. For more information, see elsman.com.