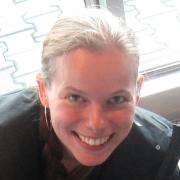 Marianne Krogh is currently working on her ph.d. project entitled "Language, motor and cognitive development from birth to pre-school age: A longitudinal study of Danish typical and at-risk infants".

The aim of the PhD project is to investigate the language, motor and cognitive development of a Danish sample of typical and at-risk infants from 4 months to 3 years.

The project is designed as a follow-up study of a sample of typical and at-risk infants who participated in a longitudinal study at the Copenhagen University Babylab from 2010 to 2013.

Both new and existing data will be used in the project. The existing data consists of developmental testings and kinematic data from mother-infant interactions. The follow-up data consists of assessments with children aged 2 and 3 years. In both ages, the children will be assessed with the developmental test Bayley-III and the parents will be given the MacArthur-Bates Communicative Development Inventories (CDI), the Child Behavior Checklist (CBCL) and the Early Child Behavior Questionnaire (ECBQ).

The follow-up assessments will be carried out from spring 2013 to spring 2015.

Supervisor of the project is associate professor Mette Væver.