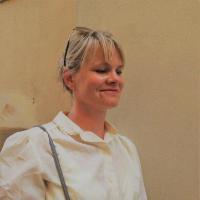 3 minutes video about the confessional ethos in mediation

Funded by Offerfonden, the Ministry of Justice Affairs: She is currently part of a collective, empirical research project on victims and the institutions they engage with during their journey through the Danish process of Justice.  The research is built on observations of the various meetings that the victims attends with the police, in court and eventually with victim support organisations, a lawyer or victim offender mediation. The observations are supported by interviews with the victims and the different authority actors. The main research questions include: How do victims articulate their experiences of the Danish process of justice? How do the authorities meet and frame the victims? As victims are expected to be most fragile, we focus in particular on their role and experiences.

Funded by Carlsbergfonden: She is also part of a research team headed by Associate Professor Tanya Karoli Christensen. The collective research project "Understanding Threats" purposes an innovative combination of linguistics and genre studies to offer in-depth analysis of threats.

Abstract of her Ph.D.-thesis:
From Rule of Law to Rule of Love – A Confessional Practice in Restorative Justice

For centuries, justice has been represented by the blindfolded Lady Justice, unable to see the person accused, hence symbolizing equality before the law. Justice is, in other words, connected to the notion that an impartial judge metes out a punishment according to the letter of the law. It is this concept of justice that Restorative Justice (RJ) and other similar initiatives in its very definition oppose, with the ambition to further the parties ‘own’ ideals of justice under the guidance of a facilitator. This thesis is based on analyses of observations of Danish mediation sessions in criminal cases and partly also of Norwegian group conferencing in criminal cases and on qualitative interviews with the participants.

Based on Goffman’s notion of people performing a preferred identity, rather than an inherent or fixed self, the words and actions of the participants in the mediation sessions are largely considered embedded in the context and only secondarily considered their ‘own’.

The analyses have delineated three positions among the victims, here described as the altruistic victim, the therapeutic victim and the uncompromising victim, and two positions among the perpetrators, here described as the exemplary offender and the resentful offender. Furthermore, the young men – independent of whether they were participating as victim or perpetrator – demonstrated a recurring, resigned pattern which I have termed offstage performance.

The positions can be seen as a reflection of a certain moral assessment of the situation, structured by a confessional ethos, including the demand for remorse on the part of the perpetrator and the demand for mercy on the part of the victim. Hence, the analyses especially reveal perpetrators demonstrating the characteristics of the ideal sinner: regretting, repenting, showing concern for the victim and assuring the other participants of his plans for a non-sinful life (the exemplary offender); and victims who demonstrate charity and forgiveness by ’downplaying’ the crime and focusing on the rehabilitation of the perpetrator (the altruistic victim). The analyses have also made visible the ambiguous situation of the therapeutic victim, since she is both ‘allowed to be angry’, but must at the same time demonstrate understanding, since the actions of the perpetrator are the result of his having been neglected.

The data also reveals a small group of participants (the uncompromising victim/the resentful offender), whose attitudes are structured around a resistance against entering into the defined, cultural ‘script’ and the corresponding roles. For these participants, a mediation session therefore becomes a struggle to negotiate and redefine the situation. When the participants object to the script and the defined roles, the analyses show that they enter into a concrete, moral discussion of guilt and responsibility. And the result of such a discussion is not always that the perpetrator ‘owes’ the victim anything.

It is also shown that the young men in a mediation session are, on the face of it, subject to the adult conceptions and interpretations of the mediation situation. Keeping in mind Foucault’s perception of power, it is, however, also possible to term it a group that through resignation refuses to be dictated or formed; by passive acquiescence, by not expressing opinions, by getting out of their ‘turns to talk’ as quickly as possible, by silence; by on the whole refusing to enter the stage, where mediation sessions take place (offstage performance). The data indicates, however, that the situation changes, when the mediator withdraws.

The overall framework is set in collaboration between the mediator and the participants of a session. The mediator encourages the participants to show feelings, express responsibility, conscience, empathy and reconciliation. This is achieved through a series of techniques such as rephrasing, summarizing and certain types of questions. The direction of the session is not, however, one-sided on the part of the mediator. The participants themselves are also actively taking care of their own ‘soul work’ as well as that of their fellow participants, and enact the narratives of confession.

Meanwhile, the session is only predictable as to the general, unspoken framework. It is up to local administration and negotiation to adjust what would be a suitable amount of remorse, when forgiveness is due, etc (the black box).

In continuation of my empirical results, I have viewed RJ-theory and the mediation situations in the light of Christian references and performed a study of the process of formation of the Danish mediation scheme in criminal cases. It is possible to view the creation of the Danish mediation scheme in criminal cases as a kind of reinstatement of the absolution as a practice, in the interest of creating law-abiding citizens. Furthermore, the ‘script’ (a written guide for the mediators with the lines and questions for the session) that is used in Norwegian conferencing can be viewed as an example of the institutionalization of a reformed, modern practice of absolution.

Foucault has described how the notions of truth and logic of the past are handed down and reproduced in new forms. From the 4th to the 6th century, the task of the pastor changed from ensuring the salvation of the congregation to ensuring that of the individual. The pastor was hence dependent on the individuals allowing him admittance to their inner life of their own accord, relating their sins. On that backdrop, the conception was shaped that each individual was obliged to confess their sins to God and a series of practices evolved, including absolution.

So Foucault states that the pastor’s imperative for confession did not cease with the reduced influence of the church, but continues to function in modern society through the notion of confession as the means of liberation. It is the idea of liberation through articulation and externalization of the inner truth, that mediation is based on.

The modern, western welfare state has been called ‘neoliberal’, suggesting a new role, where responsibility for welfare tasks is moved from state to citizen with reference to values like ‘empowerment’, ‘the citizen as the expert of his own life’ and ‘help to self-help’. This maneuver is executed in various welfare areas through legislation and practices that both presuppose individual confession on the one hand, and increased control and reporting on the other. By the very same combination of individual confession and control it is ensured that RJ-initiatives work toward the same end as the regular criminal proceedings: creating law-abiding citizens.

Even though criminal affairs are not viewed as a welfare task, this area is apparently being slightly ‘outsourced’ as an alternative to minor criminal cases, when offenders are young etc., voiced by a similar approach to citizens as responsible, self-governing and actively ‘owning’ their own conflicts. From this point of view it is possible to look at mediation in criminal cases as the first step towards a withdrawal from the Night-watchman state by making the citizens handle crime ‘man to man’. In these sessions, law-abiding citizens are not encouraged through judiciary processes, sentencing or imprisonment, but through the stimulation of an inner, panoptic judge of conscience motivating the perpetrator to remain within the law. In today’s modern, fatherless society one could ask: who is more able to convincingly appeal to the conscience and responsibility of the offender than the victim?